New data from the federal government reveals excess processing capacity for used lead acid batteries (ULAB) in Australia. The estimated quantity of ULAB available for recycling in Australia in 2012-13 was around 137,000 tonnes. The installed capacity to recycle ULAB in Australia is higher at around 173,000 tonnes. There are currently four recycling facilities:
– Australian Refined Alloys (ARA) in Sydney and Renewed Metal Technologies (RMT) in Wagga Wagga (NSW), both owned by Enirgi Metal Group
– Hydromet Corporation Limited in Unanderra, NSW
– V Resource in Loganholme, Queensland.
ARA and RMT carry out battery breaking and materials separation as well as smelting and refining to produce lead and lead alloy for sale. Hydromet and V Resource break the batteries and sell the lead to downstream processors in Australia or overseas for smelting and refining.
In August this year Dodd & Dodd Group Pty Ltd received a permit to export up to 5,500 tonnes of used lead acid batteries from WA to the Republic of Korea. In their Statement of Reasons to Grant a Permit the Department of Environment acknowledged that there is excess processing capacity in Australia. However, they concluded that many ULAB in remote and regional parts of WA were unlikely to be recycled in the absence of an export permit due to the high transport costs to recyclers on the east coast. The department also reported evidence of stockpiling when export permits were not in place. Batteries that are disposed of inappropriately or stockpiled for long periods have the potential to leak and contaminate the surrounding environment with lead and acid. 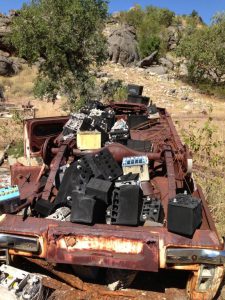 Burnt batteries in the Kimberley Region of WA